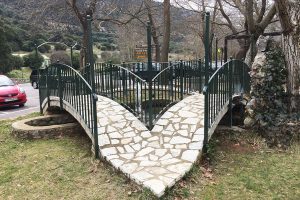 I had been to Delphi before, and stayed at the Art School residency. It was exactly the same time of year, and we followed the same steps. Went to Amfissa for the Pagan parade that had impressed me so much the first time around. Drove around the same mountains, but somehow the memories were too close to form a new relationship. I had not forgotten Delfi enough, to be able to meet it anew. I understood that it is not possible to make the future from fragments of the past, and there is no point, because the unknown will always be sexier. What stayed with me was a moment on the way to Delfi, when we stopped for lunch at a Hani, a countryside cottage restaurant. It looked generic but everything was off. There was a fountain up front, made up of a tree, a little pond and an advertisement for villa constructions to come. Of course those villas probably never came, because real estate in Greece is bust. Was that fountain predicting a future, or was it an omen telling us to not go in the direction of building villas on the mountain?

Next to the restaurant more roadside weirdness. Another fountain, this time in the shape of a isosceles bridge, crossing over a blobby pond. I took a picture and wondered if this was another exedupro omen. Whenever you went up on the bridge it split in two and you had to choose which side to walk on. Had I made the right choice? Should I have taken the other path? Did it matter? Was the water running below, helped by an electrical pump, the current oracle of Delfi? I love water, I love being underwater. When I’m dead, I want to be buried and slowly decompose in the moist earth, that could be the most relaxing experience ever. Well I guess it wont be an experience because I wont be there to experience it, but still, its something to look forward to.